On November 11, Baha’is in the Huntsville area will celebrate the anniversary of the birth of Baha’u’llah, the founder of the Baha’i Faith. The observance begins at 6 p.m., at the Huntsville Baha’i Center, 3209 Pulaski Pike.

Gatherings like this are held in thousands of localities – in homes, at public facilities, at local and national Baha’i centers, and at the House of Worship for North America in Wilmette, Illinois.

Baha’is invite their friends and the public to join them in offering prayers and celebrating with special programs, artistic performances, and refreshments.

The date is one of nine holy days during the year when Baha’is suspend work.

Baha’u’llah was born in 1817 into a noble family in Tehran, the capital of Persia. 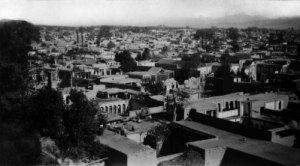 Tehran, the city where Baha’u’llah was born in 1817. This photograph was taken around 1930.
(photo copyright Baha’i International Community)

In 1853, Baha’u’llah was exiled from His native land to Baghdad, where in 1863 He announced that He was the bearer of a new revelation from God that would bring unity to the peoples of the world. Baha’u’llah was later exiled to Acre, in present-day Israel, where He passed away in 1892.

Join in a community study and conversation about this letter via Zoom:
2 pm Sundays, March 7th & March 21st.
Zoom link – https://us02web.zoom.us/j/89619470510?pwd=L1dFbThTSE03dHN4ZU0wM2tYUVdrUT09
To get the passcode to access the Zoom conversation, please email- helenkosings@hushmail.com