CAPE TOWN — In a statement published on 30 January, Archbishop Desmond Tutu, the South African social rights activist and Nobel Peace Laureate added his voice to the chorus of condemnation of the denial of the right of Baha’is to higher education by the government of Iran. 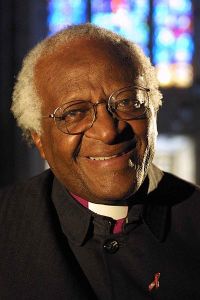 Posted on the Desmond and Leah Tutu Foundation website, the statement reads: “The Iranian government says that education is a crime for Baha’is. But I want to tell you that we can change that – we can give voice on their behalf. We can tell the government of Iran, and the world, that banning the Baha’is or any group from higher education is hurting Iran and the Iranian people. Our bitter experience of apartheid demonstrates that discrimination of all types hurts us all. Iran’s government is denying its own people the services of thousands of Baha’i engineers, doctors, and artists, who could help Iran, Iranians and the world.”

The statement was made as part of the Education is Not a Crime campaign, which began in November 2014, following the release of the film To Light a Candle, a documentary by Mr. Maziar Bahari, an acclaimed journalist and filmmaker and a former Newsweek correspondent in Tehran.

The Education is Not a Crime campaign has gained the support of numerous prominent individuals from around the world. Among these are Nobel Laureates – Ms. Mairead Maguire, Dr. Shirin Ebadi, Ms. Tawakkol Karman, and Ms. Jody Williams. Mr. Mohsen Makhmalbaf, an Iranian filmmaker, Dr. Mohammad Maleki, former president of the University of Tehran, and Ms. Azar Nafisi, an Iranian writer and professor have also expressed their support.

The film highlights the constructive resilience of Iran’s young Baha’is who, in the face of systematic attempts by the Iranian regime to debar them from access to higher education, developed an informal arrangement through which they could have access to university-level studies. The campaign features voices of support from around the world for the Baha’is in Iran and will include a global day of action on 27 February.

“The right to education is a human right which should not be denied to any human being”, said the statement of Dr. Maleki, published on the website of Education is Not a Crime. “It is not acceptable to deny any one this right on the account of belief, religion, sex or any other criteria.”

The Baha’is in Iran have faced systematic and ongoing persecution in their homeland since the Islamic Revolution in 1979. In line with its intention to eradicate the Baha’i community as a viable entity, the government in that country has denied them even the most basic rights. In addition to the right to enter universities, Baha’is are banned from working in the public sector and are repeatedly obstructed from earning a livelihood. Over the years, hundreds of Baha’is have also been illegally detained and imprisoned solely because of their beliefs.