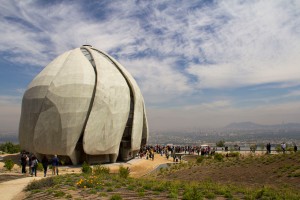 SANTIAGO — On the outskirts of Santiago, in the foothills of the Andes, an extraordinary event took place Thursday—the long-anticipated public dedication of the Baha’i House of Worship for South America and the last remaining continental Baha’i Temple to be constructed.

Some 500 guests from Chile, including senior figures from the government and civil society, as well as representatives from South, Central, and North America and the Caribbean, and further afield, gathered for the first of a series of opening ceremonies this coming weekend that will bring more than 5,000 Baha’is from 110 countries beneath the House of Worship’s soaring dome.

Opening the dedication ceremony, Felipe Duhart—secretary of the National Spiritual Assembly of the Baha’is of Chile—said that the desire of the Baha’is is that “the House of Worship will become the heart and nerve centre for this whole community,” and “a refuge for prayer.”

This role the House of Worship has as a “transcendental space that looks for unity and respect for all religious backgrounds” was emphasised by the representative of the President of Chile, Minister Secretary General Nicolás Eyzaguirre. 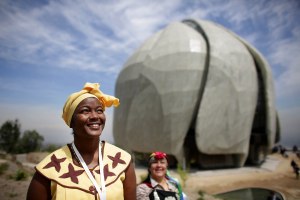 “It is a Temple which makes our landscape a more beautiful one,” he added. “It will become an icon and it will remind us how important it is to find the unity between the city and nature.”

The Temple is located outside of Santiago in Peñalolen, a commune whose name in the local language means “reunion of brothers.” As the site for the final continental Baha’i House of Worship, there could be no better name, and no better location.

“Today we see the beauty of its creation, together with all the divine and human forces that have made it possible,” Mr. Orrego said.

“Santiago will be different from now on because of this beautiful temple that has been given to us…It doesn’t matter what religion we belong to, what creed we profess, our cities are full of the thirst for silence and to transcend.”

The assembled guests—many of them attired in traditional costume—ascended the steps up the mountainside for the first devotional programme to be held in the House of Worship, in which welcoming remarks were made by the representative of the Universal House of Justice, Mrs. Antonella Demonte, and prayers and holy scriptures were recited and sung by a 60-strong choir made up of singers from Chile and Baha’i communities from the rest of the world.

One prayer for unity was sung in the indigenous Mapuche language of Chile by Berta Blanco, who was among the first of her people to join the Baha’i community more than 40 years ago.

“I think the Temple is going to bring a lot of changes for my family, for my community, for my people, for the tradition I come from,” she said.

Representatives from Chile’s diverse religious communities also welcomed the establishment of the Temple in their city.

Father Georges Abed of the Syrian Orthodox church has lived and worked in Santiago for some 26 years. He described the House of Worship as “a great gift for the society here, because it helps opens their minds and see the brotherhood of their citizens in the city.”

Rabbi Daniel Zang, representing the Jewish community, said, “It’s part of our worship to pray together, that all mankind can come together and ask God for peace and brotherhood.”

Today, the power of the Temple to unite humanity in all of its varied cultures and colours—as well its unique position between the city and the mountains—was on full display.