The roof of the Temple will be made of reeds and sugar cane leaves, and the walls will be created using stakes and plaited reeds.

TANNA, Vanuatu — In a momentous development for the island of Tanna in Vanuatu, the design for the local Baha’i House of Worship has been unveiled.

The design is captivating in its simple yet striking form, inspired by the coconut and banyan trees of the island and the natural forms of the landscape. 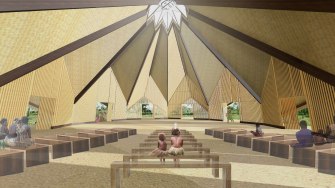 An interior view of the Temple, which will seat 300 people.

“This structure will be the embodiment of serenity and represent the archipelago’s history and culture,” said Ashkan Mostaghim, the Temple’s architect.

Double-sided roofs made of reeds and sugar-cane leaves rise to a central point, making the Temple appear as a nine-pointed star. The walls of the House of Worship are designed to be created using stakes and plaited reeds, drawing on local architecture of the region.

The joyful celebration for the unveiling of the design of the local House of Worship included children, youth, and adults.

“The interior space is defined by light,” said Mr. Mostaghim. Throughout the day, light will stream through the open screens and delicate glass oculus. The Temple has space for 300 visitors and a choir to be present—both for community devotions and private meditation and prayer in a space of serenity.

A jubilant celebration in Tanna on 18 June 2017 marked the unveiling of the Temple’s design. The program included readings from different sacred texts, signifying that the Temple is open to all.

The celebration included prayers and song.

The House of Worship will enhance the vibrant community life on Tanna. A sense of collective ownership of the Temple, even before its design had been unveiled, was already present in the consciousness of the island’s inhabitants. In the early stages of the design process, numerous people from the island, including chiefs and other tribal leaders, submitted ideas for the structure of the central edifice and gathered for meetings to discuss its purpose and implications for their society.

The jubilant celebration in Tanna included readings from different sacred texts, signifying that the Temple is open to all.

“The design of the House of Worship in Tanna has been inspired by the Baha’i writings, and we have endeavored to portray its principles in the structure,” said the architect. The Temple will uniquely symbolize the unity of all people and the integral connection of worship of God and service to humanity.

Heavy sentences, return to prison for Baha’is in Iran despite health crisis