LANGENHAIN, Germany — After prayers in the Baha’i House of Worship, as sunlight passes through the dome’s diamond-shaped windows, a group walks down a geranium-lined path to the National Baha’i Center of Germany. Inside are sacred items related to the life of the Bab, the Prophet-Herald of the Baha’i Faith. The relics are part of an exhibition created by Germany’s Baha’i community to commemorate the upcoming bicentenary of the Bab’s birth.

In 1844, the Bab brought a new Revelation to humanity, setting in motion a spiritual movement that rapidly spread across what was then Persia. Stories of the Bab’s Cause and the heroism of those who followed it spread to the East and the West. His life and teachings captured the imaginations of numerous Western writers in the late 19th and early 20th centuries.

The 200th anniversary of the Bab’s birth occurs on 29 October, and around the world people are preparing for the momentous occasion. The new exhibition in Germany is just one example. The exhibit, held from 21 April to 2 May, displayed three original items from the German Baha’i community’s archives, each related to the life of the Bab: a lock of His hair, some fragments of His clothes, and a piece of the wall of the castle of Mah-Ku, where He was imprisoned for nine months. The exhibit also includes original items related to the life of Baha’u’llah, as well as a passage written by the Bab about Baha’u’llah and another by Baha’u’llah about the Bab. Many hundreds of people from around the country attended the exhibit, and many expressed profound emotions at being able to see items so closely connected to the lives of those two Sacred Figures.

“The theme here was the Word of God and the remarkable connection between the Twin Manifestations of God,” explained Saba Khabirpour, the Secretary of Germany’s National Spiritual Assembly.

Germany’s Baha’is have undertaken numerous other steps to prepare. In nearby Gauangelloch, a village of 2,300, organizers of a spiritual education program for children and youth have been holding regular service projects, involving about 80 people, in honor of the Twin Bicentenaries. Efforts began in 2017 to commemorate the 200th anniversary of the birth of Baha’u’llah, and they are continuing throughout the period linking that historic anniversary with the forthcoming bicentenary.

“Both celebrations are so intricately linked to the whole development of the community,” said Katrin, a Baha’i living in Gauangelloch. “It’s not just two big events that are separated by two years, but really they’re part of an ongoing process of community building.”

Amid the mounting joy and excitement, the bicentenary has especially animated young people, who are finding inspiration in the lives of the heroes and heroines of the Faith from the time of the Bab—individuals who courageously faced the dark forces of blind imitation, superstition, prejudice, and corruption. Many of them were youth and young adults, like the Bab Himself.

In February, a three-day youth conference brought together some 500 young people from around the country. They shared the stories of those early heroes—such as Tahirih and Badi. Though separated by time, participants could see the profound connection between the heroism of the Bab and His followers and the selfless and courageous service of so many young people working for unity today.

“The oneness of humanity was not a utopia or a dream for me anymore,” said one of the participants, reflecting on the impact of the conference. “The vision of Baha’u’llah became much more realistic to me to see how so many people were united.” Inspired by the gathering, participants re-dedicated themselves to serving their communities and made concrete plans for their return home.

“The idea was to have a spiritual impulse that would set the tone for this holy year,” explained Sahar, one of the organizers of the youth conference, held near Frankfurt. “The stories of these youth have inspired a lot of action and helped us to draw on spiritual concepts such as sacrifice, understanding your reality, service, teaching, and selflessness.”

Samuel, another of the conference’s organizers, found that the conference not only inspired the participants but helped them to see that they are not alone. “Many youth attending the conference said they felt much more reassured knowing that there are so many others walking this path of service,” he explained. “Really, just at this conference, there are 500 other youth learning about this.”

Other local communities around Germany are also preparing for the bicentenary, focusing on integrating the coming celebration into their community building efforts as well as visiting friends and family members to deepen connections and bonds of love. In Mannheim, for example, the community is organizing storytelling nights in different neighborhoods and plans to produce podcasts of the narratives being shared. In Muenster, a group formed a choir and is planning an artistic performance in honor of the bicentenary in October. 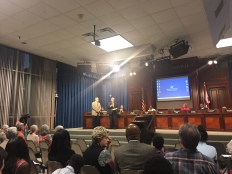