CANBERRA, Australia — Members of Parliament have honored the historic 200th anniversary of the birth of the Bab, highlighting the contributions of Baha’i communities to the life of their societies.

The House of Representatives of the Australian Federal Parliament held a 30-minute session on Monday during which members congratulated the country’s Baha’i community on the bicentenary of the birth of the Bab. The comments followed a private member’s motion with cross-party support.A video clip of a discussion at the Australian Parliament in which MPs speak about the bicentenary of the birth of the Báb and acknowledge the Baha’i community’s contributions to the life of society.

Among other points, the motion stated that the House of Representatives “considers the Baha’i community a valued part of Australian society,” “commends the contribution that Australian Baha’is make to social cohesion, unity and community building in Australia,” and “provides assurance that it holds the Baha’i Faith, its leadership and its practicing members in the highest regard, in light of their focus on serving others with excellence.”

Another MP, Anne Aly, began her comments with a passage from Baha’u’llah’s Writings: “‘It is not for him to pride himself who loveth his own country, but rather for him who loveth the whole world. The earth is but one country, and mankind its citizens.’ That’s one of my favorite quotes, because it speaks to the universality of the human race unfettered by the imagined borders of nationhood and the constructed boundaries of race.”

Meanwhile in the United States, the California State Senate has also acknowledged the Baha’i community’s contributions to society in honoring the upcoming bicentenary. State Senator Henry Stern introduced the idea of commemorating the bicentenary with a proclamation from the legislative body. This video shows California State Senate leader Toni G. Atkins as she acknowledges the Baha’i community’s contributions and honors the upcoming bicentenary in a proclamation last month.

“Throughout California, Baha’i communities strive to collaborate with others to promote peace, justice, and unity, applying the spiritual principles to their lives and serving their fellow citizens in neighborhoods across our state,” the state Senate’s leader Toni G. Atkins told her colleagues. “In their celebration of diversity and commitment to a good life for all of us, the Baha’is represent the better angels of our state.” 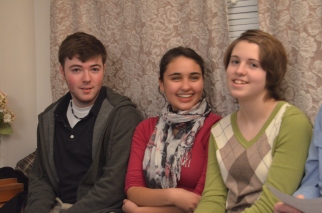