The Huntsville Bahá’í Community will observe one of nine annual Holy Days on July 10th, at noon, at the Bahá’í Center, 3209 Pulaski Pike, in Huntsville.

The service will commemorate the Martyrdom of the Báb, one of the two central figures in the founding of the Baha’i Faith. 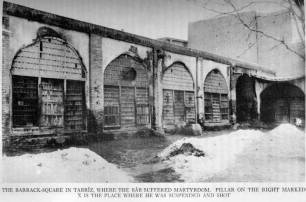 On 9 July 1850, at noon, the Báb was put to death by firing squad in the public square of Tabriz, Iran.

Facsimile of the Báb’s tablet addressed to “He Whom God shall make manifest” (Bahá’u’lláh).

Six years earlier, He had declared that He was a messenger of God whose mission was to prepare the way for the imminent arrival of the Promised One of all religions who would come to establish a new age of peace and prosperity in the world. In 1863, Baha’u’llah announced publicly that He was that Promised One.

The Báb attracted tens of thousands of people to His teachings, thousands of whom were killed in persecutions that swept Iran. Finally, authorities had the Báb Himself put to death in an attempt to stamp out the new religion.

The Shrine of the Báb, the burial place of one of the Founders of the Bahá’í Faith, on Mount Carmel in Haifa, Israel.

A half century after His execution, His sacred remains were brought to Haifa for entombment on Mount Carmel. Today His shrine is one of the most famous landmarks in Israel, and the Bahá’í Faith is established in virtually every country.

Preparation for the local observance comes amid news that tens of Baha’is’ shops in the cities of Rafsanjan, Kerman, Sari and Hamadan have been sealed by government authorities in an effort to pressure Bahá’ís not to observe their religious holy days.

More information on these and other continued actions against the Bahá’ís in Iran can be found at the Bahá’í World News Service.